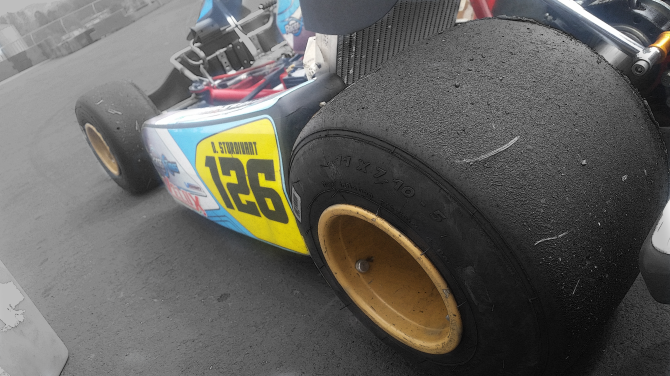 ^^ I know I’m using pictures from an earlier post, but I wanted to get this series started. ^^

At the start of this year, I made the change from racing in the World Formula class to Tag Sr with the X125.  I’ve gone from 15hp at 7,100 rpm to having 30hp at 15,000 rpm. So, I was going to have to start making some changes. It’s been really fun, but by doubling my horsepower,   I basically doubled the amount of things that I needed to take care of at the track. Changes in my driving style, massive changes to the setup of the kart, and changing the way that I approach going to the track.

I’ve always had the ambition to race in faster machinery, and be competitive. When I was running a four-stroke, there was just enough stuff going on that I could handle the majority of the work by myself during club races.  However, I knew that when I moved to TAG, I was going to need help getting to the next level.

Fortunately then the timing was right, and I reconnected with my friend Chris Novotney.

Chris is just as focused as I am on getting the most performance out of ourselves, which makes him super-easy to work with.

I’ve known Chris N. for a while, since when we started racing in autocross, six or seven years ago. He loves all forms of motorsports, and it’s nice that we share similar tastes in cars. He is now a student at Western Washington University, studying Industrial Technology, with a concentration Vehicle Design. He’s got an intense career passion to become a race engineer.  Add on that he’s  part of the Formula SAE program, volunteering as a suspension engineer for a BRZ Rallycar and managing data collection Global Rallycross Lites car through DirtFish Rally School.  So he’s definitely going the right way.

We met up again at a Motorsport Seminar in Tacoma, WA earlier in the year. After we caught back up, we discovered that there was a mutual opportunity to help one another. Chris has been looking to get more motorsports experience working with vehicle setup at races. I’ve been needing someone to work with me to understand my kart setup better and engineer to go faster during races. 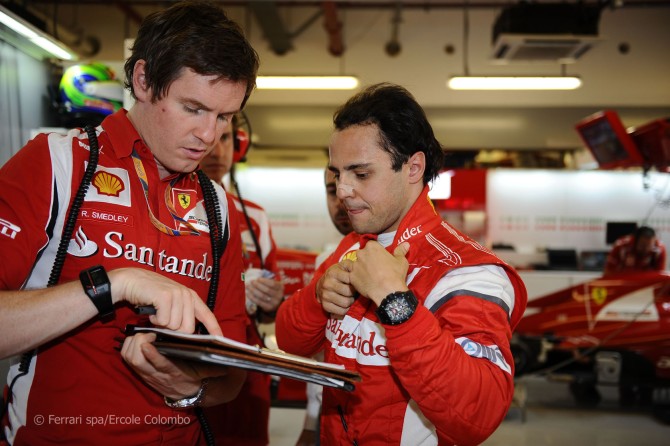 Getting to know you

The great thing is that Chris and I are both racing nerds. However, engineering with a driver is definitely not the work of a moment. It has to be more action at the track, than just talk about people are going to do. (I’ve worked with other people in the past who were more talk than action. It hurts any progress that you want make, because the proper expectations weren’t set.)  Fortunately, Chris and I have been on the same page about what want to do from the first day. The first thing that we identified was that transparent communication between the two of us is key for this project to be a success.

It’s important to have a close understanding with the people that you’re working with on your racing team, so you’re setting the appropriate expectations to make sure that everyone is working at their best. As a driver, your teammates are apart of your support network, so it’s important that everyone has a positive experience and working in the same direction.

Look how Smedley and Massa do it. 😉

Before we turned a single wheel, Chris and I started spending time together to really understand 1) what each other’s goals were by working together, 2) what we expected from one another, and 3) how we were going to begin setting up our approach togoing to practice days/races. He wants to be a better engineer, and I want to be a better driver, so it’s all working out.

Getting the most of our days at the track

We both agreed that it important to maximize any track time that we’re able to get.  We’ve been setting up practice day schedules, and identifying what races we want to go to ahead of time, so we can schedule our lives better.

Prior to each practice day, Chris and I meet up to discuss what the agenda should be for that weekend.  We pick one thing that we decide that we want to improve on for the day.  Practice days aren’t just about pounding around laps, and hoping to luck into a good laptime. If you practice doing specific things well, you’ll make more recognizable improvements.

Sometimes, we’re just learning a new track, or organizing our pits in a more effective way. Other times, we’ll have specific setup changes that we’d like to try, or Chris would like my feedback on a setup idea. We’ve also been writing down questions about the kart that we don’t know, so that we can learn more about how to get the machine to perform better.

I’m unbelievably excited to get this started. I’ll be using this [TAGTeam] series to document our progress at the track.  We’ll take some of our onboard videos, and writing about some of the things that we’ve been learning about doing this project.

It’ll be exciting to finally be able to approach going to the track the right way. Let’s see where it goes.

One thought on “[TAGTeam] Part 1 – Getting to know you #theartofkart”

Day 15 of #RMFastFeb is "Where I'm Racing". I'm figuring out my club and practice schedule, but I have one goal. I'll be running the NWKA ICP Cup in 2020. They have the biggest races in the region, and I'm going to improve on my 6th place finish from last season. 2020 Sprint April 17-19 Richland, WA Tri City Kart Club May 22-24 McMinnville, PKA Kart Club June 12-14 Tacoma, WA  PSGKA July 17-19 Chilliwack, Canada West Coast Kart Club Aug 7-9 Sumas, WA SIMA Kartng Facility #keepkartingfun --- 2020 Sponsors/Supporters @APDriverDevelopment @425Motorsports @HugglerRacingEngines @StudioRhoad @NotFamousRaceDriver @ProvaMotorsports @Kartpulse OUILLC/Team Hope @RacersHQ #keepkartingfun #karting #racing #kart #race #motorsports #speedsecrets #ProjectD #RMFastFeb
#happyvalentinesday my love. I'm so glad you're my person!
So Day 13 of #RMFastFeb is 'Palentines Day', so of course I had to pick @spskart20. Ty's been awesome to have around the pits. Helps take the pressure off, speaks my language and enjoys a good post-race ice cream. My wife and I love having him around. #shutupanddrivethegokart --- 2020 Sponsors/Supporters @APDriverDevelopment @425Motorsports @HugglerRacingEngines @StudioRhoad @NotFamousRaceDriver @ProvaMotorsports @Kartpulse OUILLC/Team Hope @RacersHQ #keepkartingfun #karting #racing #kart #race #motorsports #speedsecrets #ProjectD #RMFastFeb
Senna finally gets a shot of her own. #racerkitty #catsofinstagram
So Day 12 of the @racingmentor, I didn't want to do a video of the music I listen to, without music (and I don't have the time to make a short music video), so I figured I'd take some screenshots of my recent playlists. If I come back with a better idea, I might redo this one. #RMFastFeb #keepkartingfun #karting #racing #soundtracks #drumandbass #animesoundtracks
So I decided that I wanted to do something different for @racingmentor #RMFastFeb and share some real talk about sponsorship. For 99% of us, the only people who will care about our race results are us and our parents. That's not where the value is for most people. When developing a relationship with a sponsor, race results are not what you should be leaning on (unless race results drive revenue for them.) ---- Protip 1- Do your homework and figure out how a potential partner makes their money and align to that. Protip 2 - Find that unique thing about you that makes that relationship grow, and leverages what you learn from Tip 1. This is not easy, but for all of you fast drivers who wonder why sponsorship is so hard, it's because you're asking for yourself, not looking for value for others. --- Ok, I got that off my chest. Back to regularly scheduled programming tomorrow. #karting #motorsport #racing #grassroots #sponsorship #business #notfamousracingdriver #w2w #scca #nasa #rally #24hoursoflemons #drifting @StudioRhoad @NotFamousRaceDriver *Redo, because I had to get it under 60 seconds for IG*
I love seeing the inspiration for my helmet design being used at the kart track @carlossainz55 @McLarenF1 @oktanevisual #f1 #keepkartingfun #karting #racing #kartracing
So Day 10 of the @racingmentor social media challenge is 'Causes'. I wanted talk about a cause that's near to me. A few years ago, my mother had a successful kidney transplant. Chronic Kidney Disease is hereditary on her side of the family (which is one of the reasons I don't drink/smoke, etc) She's now a powerhouse, working with the University of Washington Kidney Research Institute, traveling to DC and all sorts of things, so I'm blessed she's with us. My parents created a evangelism group called 'Team Hope', which promotes awareness on kidney health and how to help others with chronic kidney diseases. I've also run Team Hope stickers on either my race gear and on my go-kart every season, as a reminder of the importance of family, the importance of health and for good luck. --- 2020 Sponsors/Supporters @APDriverDevelopment @425Motorsports @HugglerRacingEngines @StudioRhoad @NotFamousRaceDriver @ProvaMotorsports @Kartpulse OUILLC/Team Hope @RacersHQ #keepkartingfun #karting #racing #kart #race #motorsports #speedsecrets #ProjectD #RMFastFeb
Such a cutie. #deedee #kitty #kittycat #kittylove #catsofinstagram #cats #catstagram