Live data from a race car running on the track is a highly valuable car tuning and driver training tool. Until now, getting this sort of data access and control has been out of reach for most racers. The creative folks at Autosport Labs have built a product called Race Capture that gives even LeMons racers like me the ability to have high level live telemetry running on our cars.

I can’t wait to get my hands on this magic box. Having the ability to have this device do things like flash warning lights on the dash when the oil temp gets too hot, or simply transmit temps, boost, rpm, and fuel level back to the pits will be incredibly helpful when running Pujo! at events. The fact that we can also set Race Capture up to record lap times, display track position using GPS, and even overlay data onto our in-car video is icing on the cake. That all of this costs less than a pair of tires is astounding.

Race Capture is being released through an Indiegogo campaign to crowdsource funding for production.

Make the jump for a video update with an interesting competition where folks can get one of the first Race Captures next week – before the Indiegogo campaign is closed.

At the time of publishing of this artice, the Indiegogo campaign has been live for a week and Autosport Labs has already reached 1/3 of their goal. They just released a video announcing a competition for early delivery of the first two Race Captures to people who submit a story or video explaining what they will do if given one of these devices. I wonder if making an accurate GPS driven speedometer for The Healey would get their attention?

Race Capture is a small device. Below is a picture of it connected to a GoPro; it looks like it is small enough to fit on little formula cars and probably even karts. 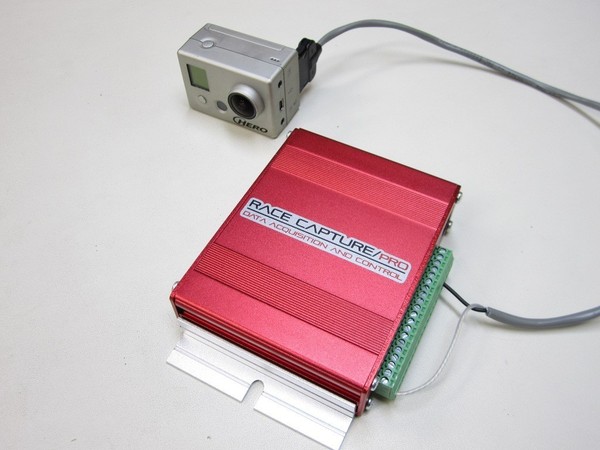 I am a fan of the Autosport Labs folks, they have been competitor friends for a number of years. I’ve watched them develop Race Capture at a few LeMons races and have been impressed. That they are building this as an Open Source project is something I find really cool. Open Source projects are ones where the programming code that runs the device is handed out for free to the user community to modify or enhance. This means that the community of Race Capture users will be able to develop new features to fit their needs without waiting for Autosport Labs to release a software update. I expect Race Capture will take off similarly to how the MegaSquirt do it yourself fuel injection system has.

Visit the Race Capture Indiegogo campaign at: http://www.indiegogo.com/RaceCapture for more details and to order your Race Capture. This campaign ends on January 3, 2013.