Chevrolet’s Citation X11 is an example of the worst of American car making. For this series I typically write about cars that I find desirable. However when Alan Dahl sent me this set of pictures, I knew I needed to feature this car. 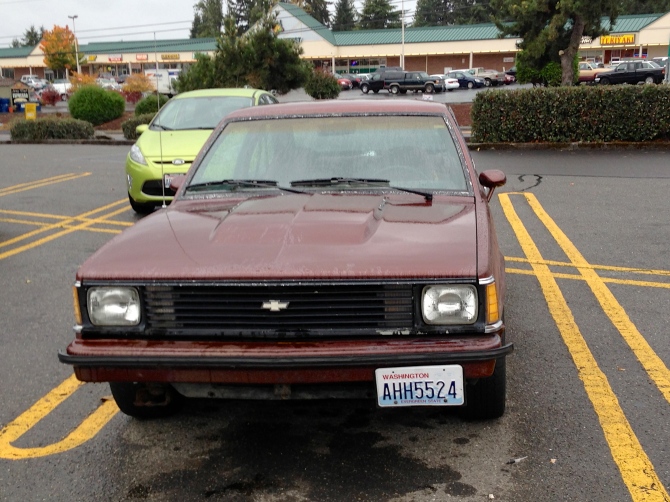 The Citation is a car I wouldn’t want to own, even as a LeMons racer. Okay, maybe I could find a way to enjoy it as a LeMons car, but only if I re-powered it with something fun, like a London taxi’s diesel. The Citation was developed towards the end of the dark days of the 1970s and embodies what was wrong with the American car industry at the time. Group think driven “good enough” engineering and low-bid parts supply contracts riddle this car with mediocrity. Still, it has its charm. I’ll let Alan take it from here. Here is his take on the Citation X11:

Today’s subject is this wonderful vintage 1981 Chevrolet Citation X-11. Like last episode’s Pontiac Astre the X11 also hails from Federal Way which I am beginning to think is the West Virginia of the Seattle area, at least when it comes to cars. Also like the Astre the Citation wears its original shade of paint, this time in babyshi… umm, metallic brown which has settled into a nice patina. The X-11 is owned by one of the workers at my local Safeway. He usually works nights so good photos of this car have eluded me but thankfully I caught the car during a rare day shift so I can share it with you. I don’t know much more about the owner or his car except to say that it has to be his daily, or rather nightly, driver as I see it parked in the Safeway parking lot all the time. It appears to me mostly straight however though the nicer paint on the passenger door makes me suspicious that it may have suffered a collision in its younger years. 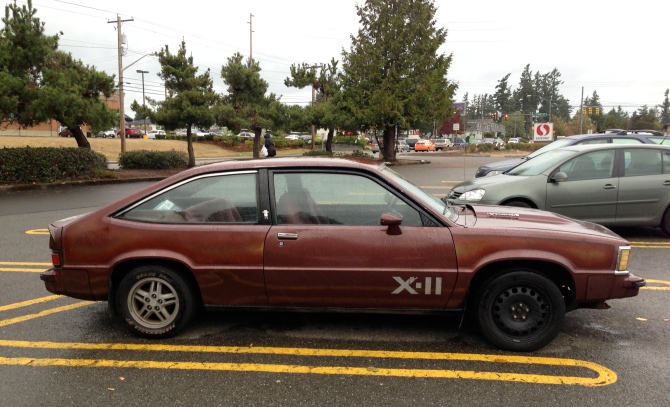 As you can see the X-11 model came equipped with the “high output” V-6. This engine made a whopping 135 hp, 25 more than the standard 110 micro-ponies the 2.8L V-6 made in lesser Citations. While 110 hp or even 135 hp seems ridiculously little horsepower for a 2.8L engine these days the X-11 actually had a racing pedigree with Bob McConnell, winning the SCCA SSB National Championship in 1982 and 1984 in his 1981 X-11. But considering that a Renault Fuego won the 1983 championship perhaps that’s not saying much about the quality of the competition at the time…

The Citation was a huge hit its first year, selling over 800,000 units but that quickly dropped to 400,000 in 1981 despite the addition of the X-11 model which added 11,600 units to the total. Sales dropped off even more quickly after that as reliability problems quickly surfaced.The Citation breathed its last breath in 1985 before GM mercifully put it to sleep but the A-body chassis survived as the heart of several subsequent GM vehicles, most notably the vanilla Chevrolet Celebrity. It’s not impossible to sight a Citation or its brethren these days but they are getting rarer and rarer as they never were cars that owners cared about all that much which makes this X-11 even more of a rare bird than many lower-production but more well-cared-for vehicles of the 1980’s.

Leave a Reply to Truth About Grammar (@GrammarTruth) Cancel reply