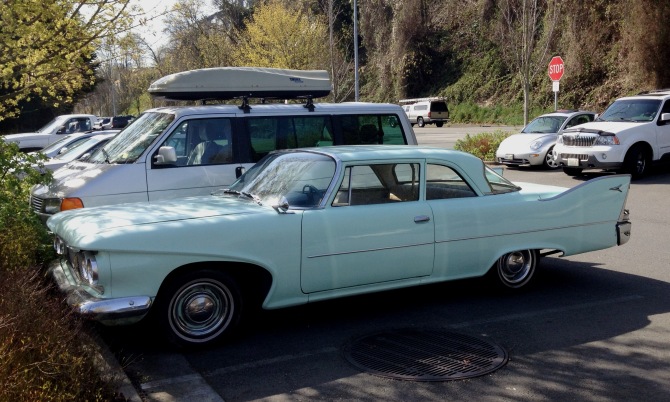 This 1960 Plymouth Savoy is a real attention grabber. More noteworthy than this car’s giant tail fins is the fact that this car introduced to the world the legendary Slant Six engine. The leaning tower of power got its start in this car.

The tail fins jut proudly out of parking stalls as the hindquarters of this long coupe dangle in the roadway in comparison to the diminutive Civics and minivans parked next to it.  Tail fins were beginning to fall out of fashion in 1960.  In an attempt to give them a reason to exist, they were called “Stabilizers” and were marketed as reducing steering corrections by 20% in a cross wind.

That steering wheel is big; perfectly sized for cruising with your arm resting on the door sill.  Some of these cars came with a push-button transmission.  The gear selector buttons located just below the flying saucer instrument pod.

The car was designed by Virgil Exner.  He is famous for some cutting edge designs in the Chrysler 300 and Imperial luxury cars.  Look at the styling of the front fender and wheel well.  The brow over the headlight cuts down and around the wheel in a surprisingly stylish way for a mass market car. 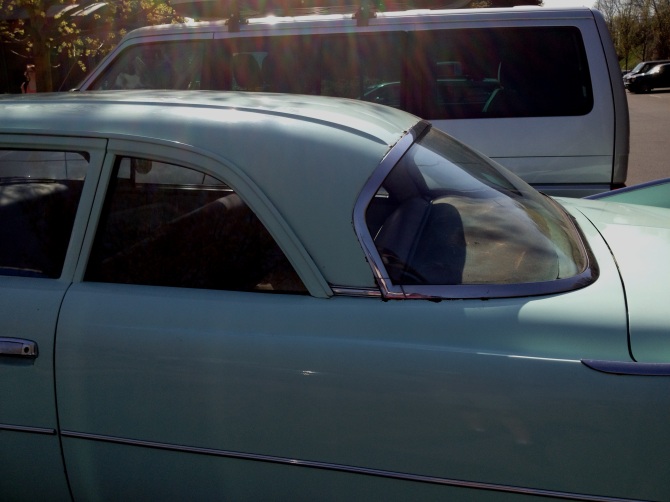 This is a striking car to encounter in a parking lot.  Those stabilizers are like hands waving passers by down.  I see this car in its neighborhood all the time, it does daily driver duty.