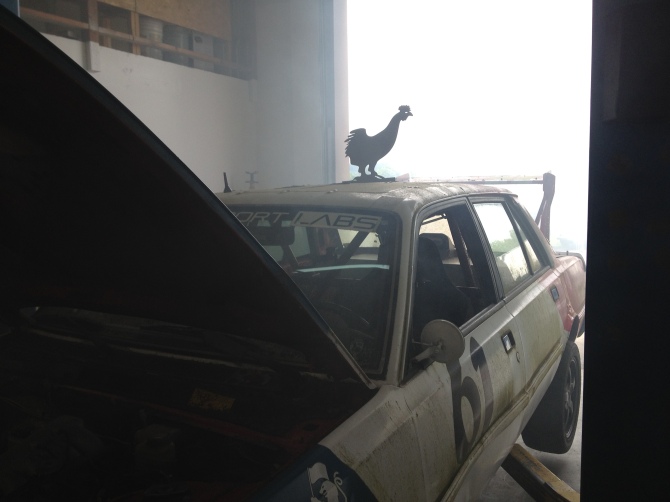 The first work party on Pujo! was a tremendous success. Being a team of drinking gourmands, Doug and I set the tone for the day by first procuring adequate beer to fuel the wrenching. The choice of the day was Churchkey, a northwest brewed pilsner perfect for hydration and idea inception when hammers and cursing fail to reveal a solution. 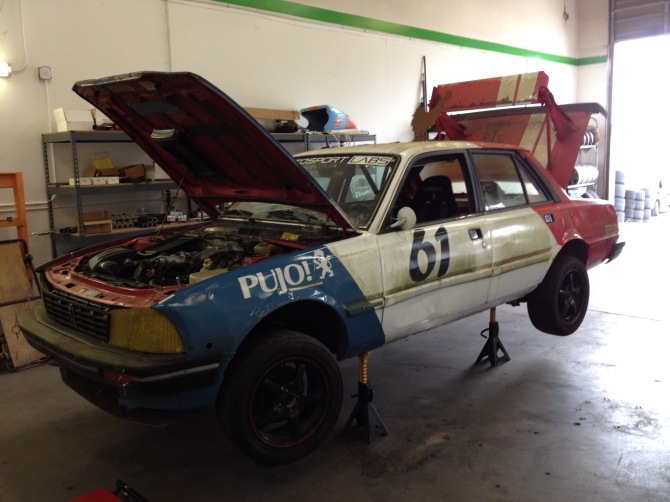 At the top of the task list for Pujo! was fixing the steering. You’ll recall that we had some adventures loading Pujo! and delivering him in one piece to Chase Race. After securely placing Pujo! on stands, Doug and I hit the creepers and slid under the greasy icky mess that is any 505’s engine bay to survey the damage. I grabbed the driver’s side tie rod; it was dangling loose in its boot, connected to the wheel but not to the steering rack. Peeling open the boot, I saw that the tie rod’s ball joint had clean threads and an unbroken end. I threaded the ball joint onto the steering rack and realized that I had fixed the steering.

It appears that a locking tab had broken loose, allowing the tie rod to liberate itself from the rack. We’ll figure out a way to keep this union intact, perhaps an easily grindable spot weld? This is LeMons after all.

With working steering, Pujo! earned lift privileges at Chase Race. Our next issue was determining the source of the smoke that billows from the exhaust. Normally, a little smoke isn’t that big a deal. Keep the sump more than damp with oil and you’ll have nothing to worry about. This amount of smoke was a little over the top. 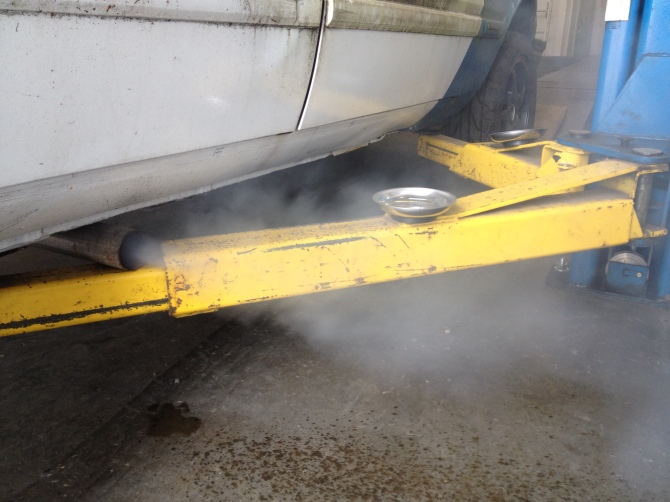 Beer fueled analysis of the characteristics of the smoke as well as a visual and taste test of the plugs lead Doug and me to believe that the oil seals in the turbo are bad. Fortunately our teammate Alan Dahl, yes, that Alan Dahl, combs craigslist daily for Peugeot parts and has a good used turbo for us.

We want to investigate the oil pressure when Pujo! is running under load at speed. Are we blowing out the seals of the turbo? Can we fashion a pressure regulator to preserve the turbo? More investigation, and beer, is required to solve this problem.

Satisfied that we need to removed and replace our turbo, we shifted to the next item on Pujo!’s do list, increase roll stiffness. With the car in the air, the decrepit state of our bushings is easily seen. It’s time to press out some bushings and mill some new pieces out of cheap delrin.

Work party #1 was a glowing success. We drank some really good beer, Pujo! is steerable, and we know the source of the smoke show. To cap the day, an E30 M3 arrived to have Chase Race weld in some chassis reinforcements.

Stay tuned for the next installment in the Perils of Pujo!. We’ll get the turbo replaced and look at roll stiffness enhancements.

6 thoughts on “|LeMons| Pujo! is a Steerable Smoke Bomb”